Friendship House opened its doors in 1986. It was started by ten ecumenical organizations whose shared commitment to peace and justice called them to help the growing homeless population in the Skagit Valley. This group had been meeting for two years to lay the groundwork for what became a valley-wide movement. Their vision was inspired by the Catholic Worker Movement and Dorothy Day, as well as by base Christian communities in Central America.

Friendship House's first residence at 1008 S. Third Street in Mount Vernon accommodated men downstairs and women upstairs. In 1992, a second house was purchased at 922 S. Third Street dedicated to women and families. Meals, clothing and referrals to other services were offered. The founders observed that the institutional model of shelters - where homeless people must be out by early morning - did not allow people the time or space to develop stability, nor did it give them an opportunity to heal and change. Friendship House operated (and still operates) from a "community model." It depended on the solidarity and participation of the people living here. Residents contributed to cooking, cleaning, painting, repairing and maintaining the houses.

As Friendship House continues, with over 35 years of service, it holds true to the vision of its founders. It remains an independent organization committed to building community among people in crisis. As a 501(c)(3) nonprofit organization, Friendship House is governed by a volunteer Board of Directors and operates with a staff of nine, not including our team of 21 on staff, who specifically run the newly opened Skagit First Step Center, in Burlington, WA.   This new low-barrier shelter is operating at full capacity, currently offering 45 cabins for safe, temporary shelter with access to services. Friendship House continues to partner with other agencies in the region's continuum of care to ensure full support of the individuals in programs with us.
Learn more about the history of Friendship House by reading this book available on Amazon 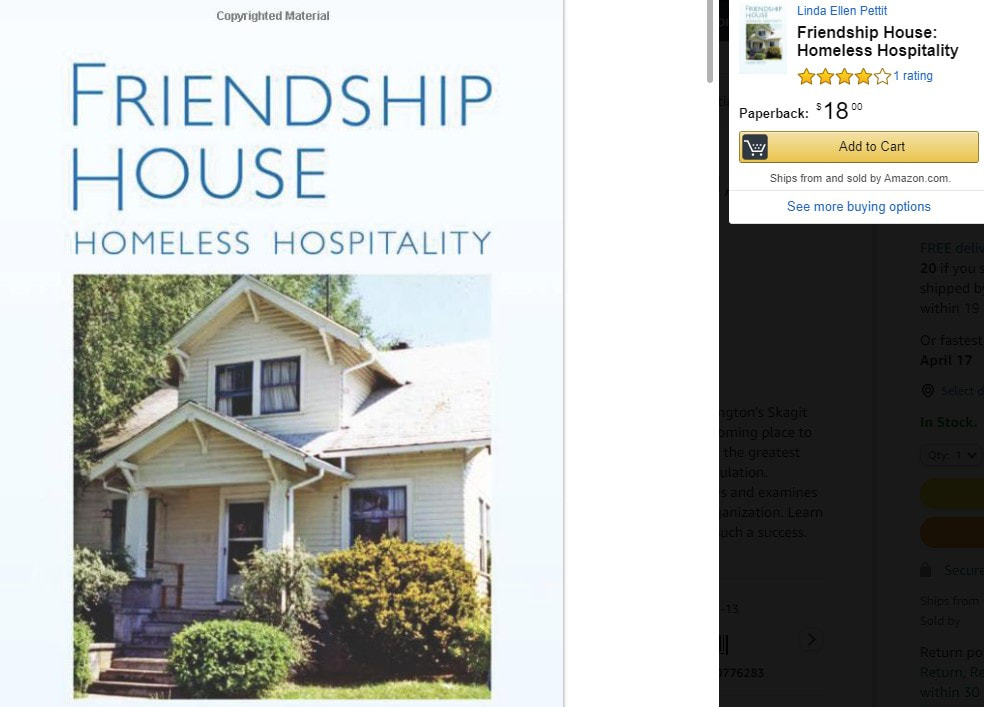 authored by a past Board member